If there are no packages for your distribution yet, you can try the installation from source.

Note: Updated KWin versions from PPAs like "Kubuntu Backports" might be incompatible with the plugin from this PPA and will not even attempt to load it. With such a configuration, at least kwin-effect-xrdesktop will have to be built from source.

xrdesktop can run on Valve's SteamVR via the OpenVR API as well as any OpenXR runtime (specifically tested is the "Monado" runtime) via the OpenXR API. This support is implemented as backend libraries for gxr.

To run xrdesktop on OpenVR/SteamVR, install the OpenVR backend:

Running xrdesktop on OpenXR/Monado is supported without additional packages. The OpenXR backend is already included in the libgxr-0.15 (or newer) package. Read the xrdesktop wiki about openxr for more information.

In the following sections, remove the -git suffixes to build the stable version of xrdesktop. Note that the stable AUR packages are maintained by a volunteer not affiliated with Collabora.

Unlike the ubuntu package, the gxr package depends on openvr and openxr headers. Both backends will be built and installed.

KWin will be automatically installed by this command and can be run standalone. To make use of the plasma applet, plasmashell should be installed.

If you just installed xrdesktop and have not restarted kwin yet, do so now, for example in krunner (Alt + F2):

The xrdesktop KWin effect can only work and mirror thed esktop windows to VR when OpenGL compositing is used. KDE disables desktop effects by default when a full screen application with graphics is running. This is also the case when running SteamVR.

This option should be unchecked in systemsettings5:

Alternatively you can also run the following qdbus command

If you just installed xrdesktop and have not restarted gnome-shell yet, do so now: 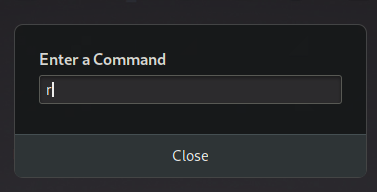 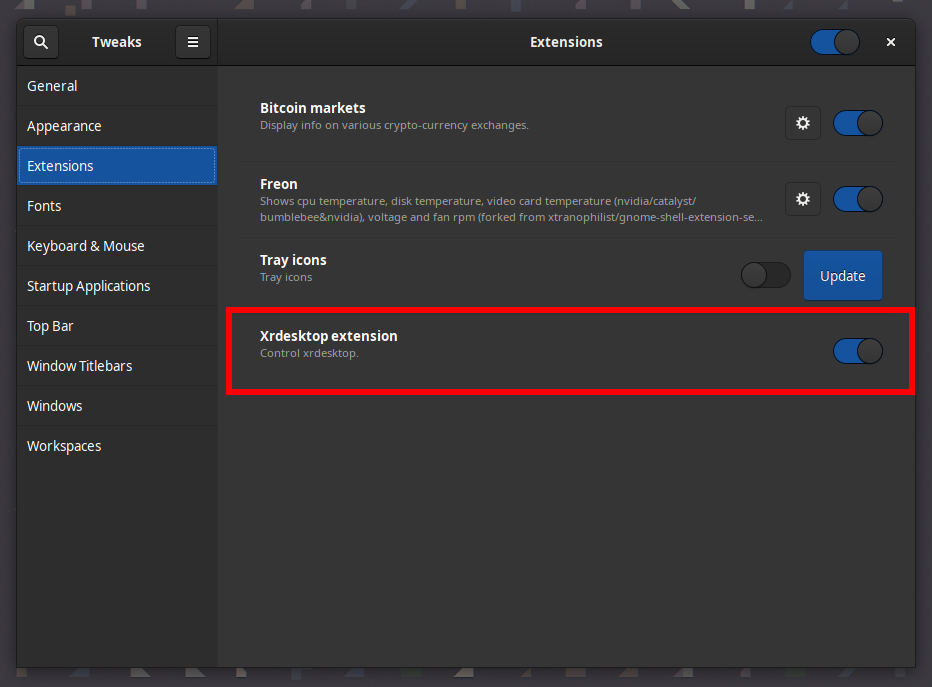 Alternatively you can also run the following script, which is included in gnome-shell-xrdesktop

The xrdesktop package includes a dedicated settings UI named xrdesktop Settings in the menu or /usr/bin/xrd-settings.

Individual settings can also be set with the gsettings command line tool. For example:

All settings should apply immediately to a running xrdesktop session.

Running kwin_x11 --replace in a terminal will immediately (without starting xrdesktop) print this message if the plugin could be found and loaded:

If it does not, ensure KWin desktop effect is enabled 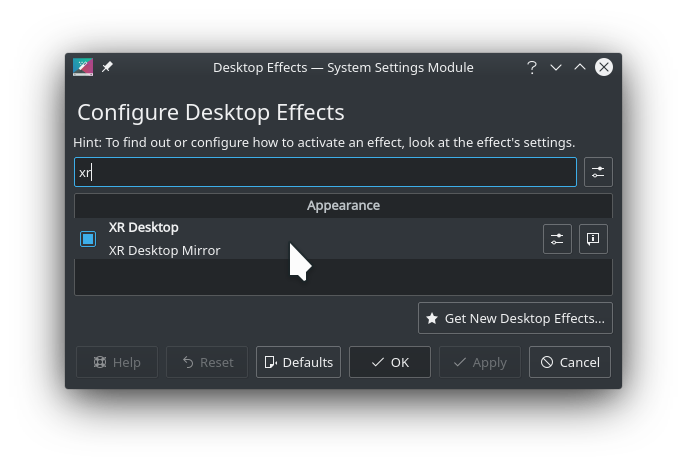 Make sure you don't filter the effects: 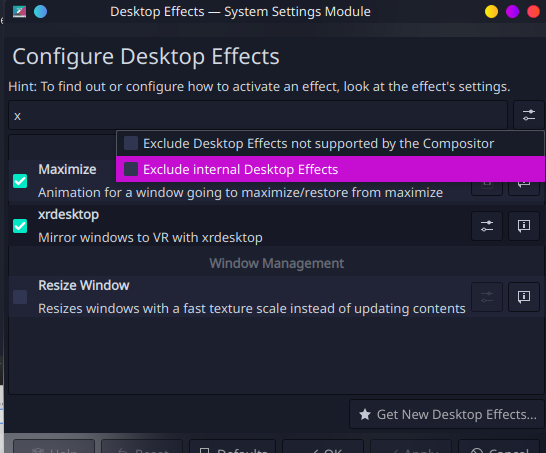