Migrating issue from gitlab.com to gitlab.freedesktop.org

In trying to debug a problem with an application, I noticed that the Video Adapter RAM reported by the driver is zero (0) bytes. I suspect this is contributing to my graphics application error that checks the configuration of my box before starting.

My XML configuration is the following:

And, the resulting qemu call has the following argument (newlines added):

I have attached a screenshot of the driver information from msinfo32. 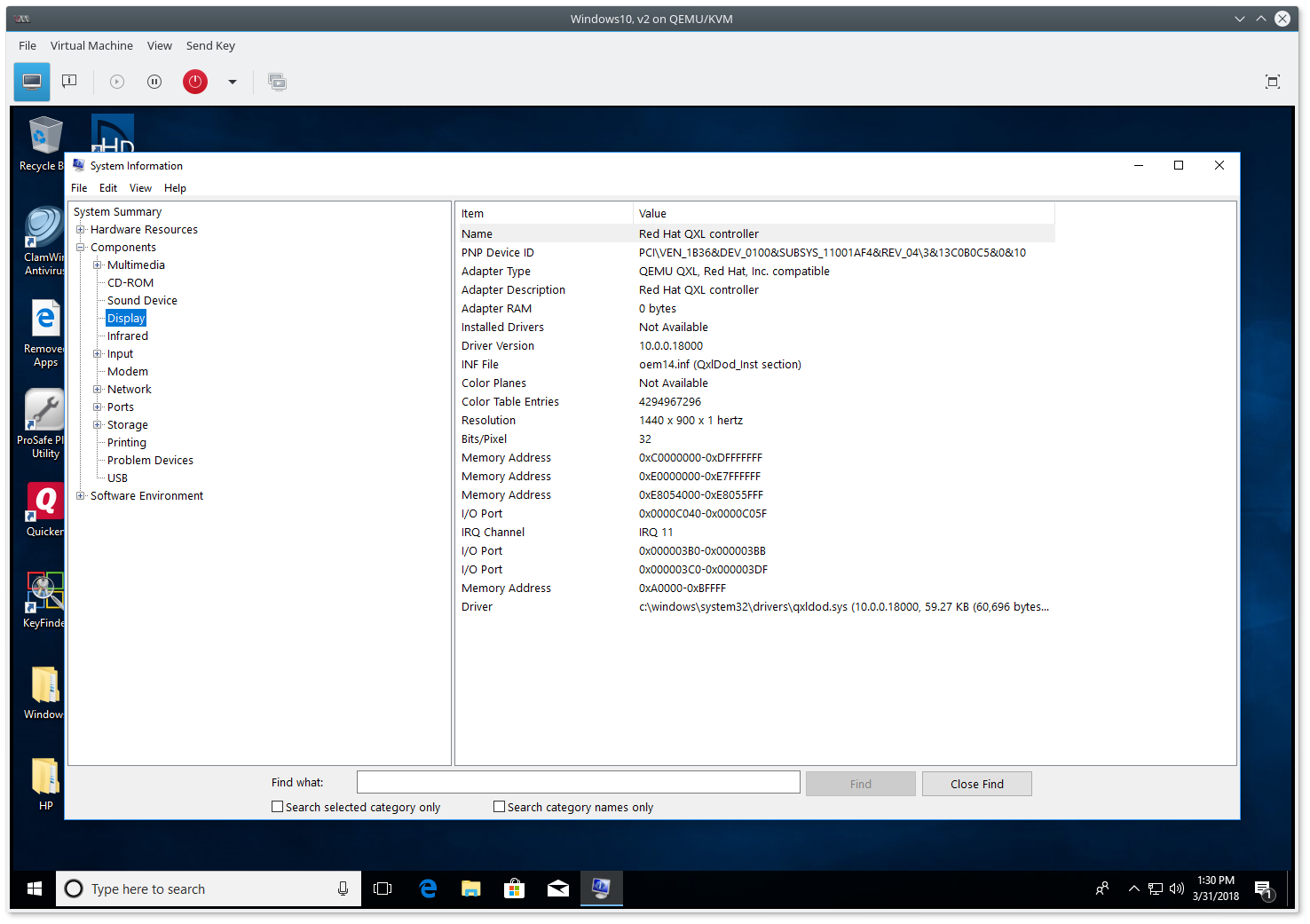 In speaking with Vadim on the old GitHub repo, the feeling is that this is this a bug and not a configuration issue. He provided two references which I reviewed: the code (QxlDod.cpp#L1970 below) and the graphics memory reporting reference from the Microsoft WDDM documentation.

My investigation suggests that Windows has the memory allocated appropriately (i.e., as I had configured the VM, see System Information - Memory below). I verified the registry information for the driver (see Registry Information below). When using ZwSetValueKey() as the driver does, I found a reference in the Microsoft documentation that the units for HardwareInformation.MemorySize is in megabytes. However, changing the registry key requires the value to be in bytes (e.g., 512MB is 0x20000000, not 0x200); see System Information - Adapter RAM below. Most likely, the documentation means that the value must be in whole megabytes.

I don't understand the comment on line 1970 regarding the Basic Display Driver (BDD) not having access to video memory. The documentation for DxgkcbGetDeviceInformation suggests that you have access to this information in the DXGK_DEVICE_INFO type, in SystemMemorySize.

Given the above, my questions are:

Lastly, I would like someone to provide descriptions for each of the QXL command line options in the SPICE documentation including their inter-relationships. Examples would also be helpful. I have read the code to understand what is happening but I am still not clear that I am doing this right. 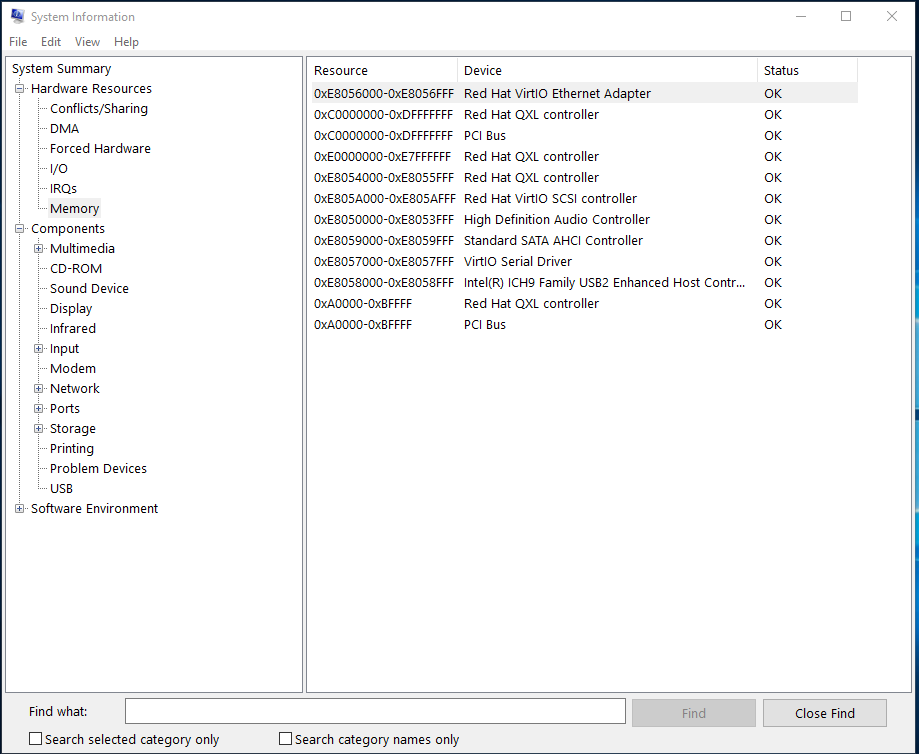 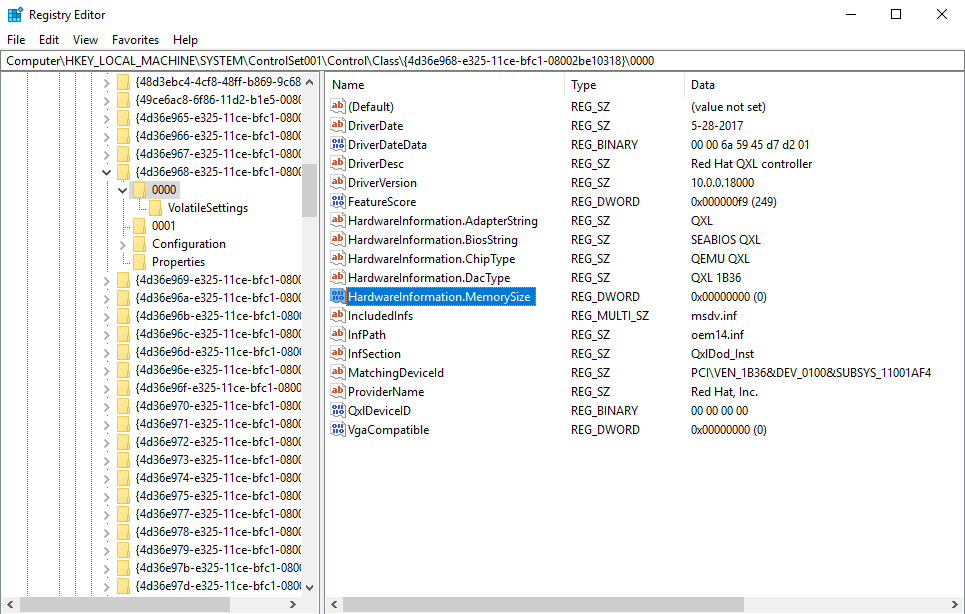 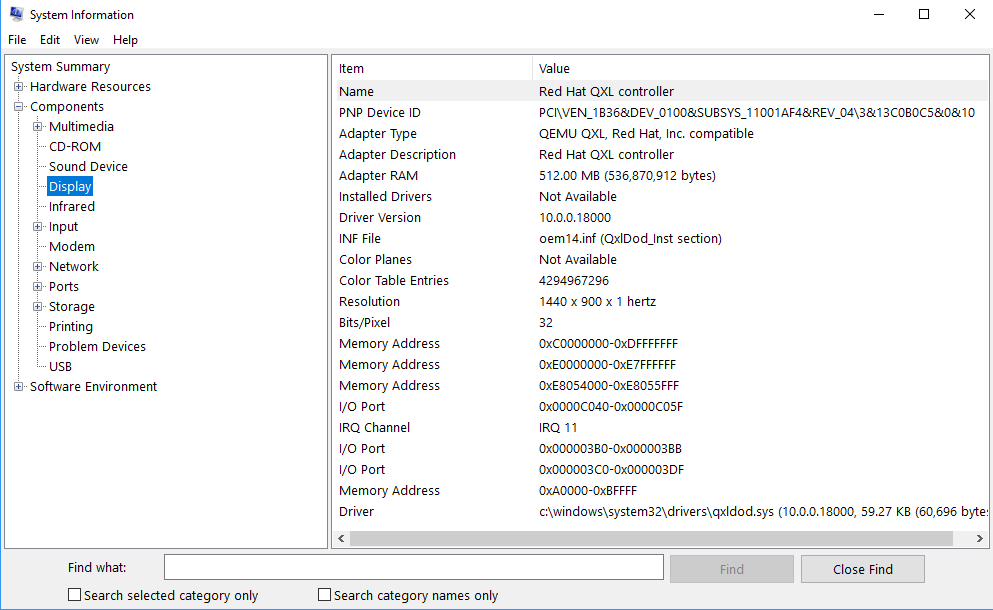 I created a merge request, !3, to address the issue based on my research on the issue (i.e., the details above).

Video RAM size is not trivial value for QXL driver in non-VGA mode. The driver use two areas of 'physical' memory provided by the hypervisor for virious data structures related to communication with Spice component on the host. The memory becomes fragmented as the driver allocates the memory for these data structures but the host decides when to free these chunks of memory. So, the 'memory size' that the driver can report is rather formal number that hardly can be used for practical purposes.

This can be considered as a bug. Till now we're not aware of any application that depends on this reported parameter. Testing the driver under WHCK certification tests at time of release did not raise any problem, although the test procedure checks some registry parameters reported by the driver.

This procedure in part of legacy (XP-compatible) video driver API and not of WDDM API. For example, WDDM driver can't provide any meaningful value for HwDeviceExtension as there is no such device extension. Possible, this legacy API call still can be used but this should be checked and, possible, may create compatibility problems with further builds of Windows. We relay on results of WHCK procedure and available application compatibility results.

Thanks for answering my questions.