When recording audio (using pw-record from PipeWire, parecord from PulseAudio, arecord from ALSA using either the pipewire or pulse devices, or my own apps using the PulseAudio API), it connects directly to the output of a specific playback stream in a specific app rather than the monitor device that's a mix of all streams playing out through the device. See this screenshot for how PipeWire automatically connected the recording app, with Pale Moon playing two streams, as seen in QjackCtl: 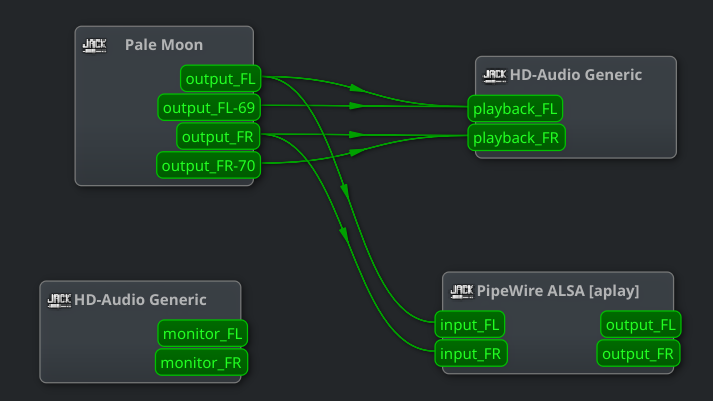 With my own apps that use the PulseAudio API, it reports being connected to "Monitor of Starship/Matisse HD Audio Controller Analog Stereo" (the correct/expected device, which is "HD-Audio Generic" in JACK), but is not actually connected to it. With QjackCtl, I can manually reconnect the recording app's input to the monitor outputs and it then correctly records the device mix, but the next time the app runs, it connects to one of the app's output streams again.

My system has no other recording device, if that may be relevant. The (hardware) recording device that's there has nothing plugged in, so is unavailable/not present and disabled with the selected profile.