On Fedora 33 I have replaced PulseAudio with PipeWire, which is also acting as the JACK server (packages pipewire-pulseaudio and pipewire-libjack with library replacements).

I'm using QjackCtl to inspect and change the audio graph. I'm trying to route things in some specific way I need, which involves the capture input from the SB Audigy card, outputting to multiple different cards and using virtual sinks to route things as I need. Things generally work, and I can select e.g. a sink as the default PulseAudio device through the Gnome settings (or pavucontrol for that matter).

However, I can't route anything to anything. This is the current graph as shown by QjackCtl (not the final wanted setup, just playing around with building blocks): 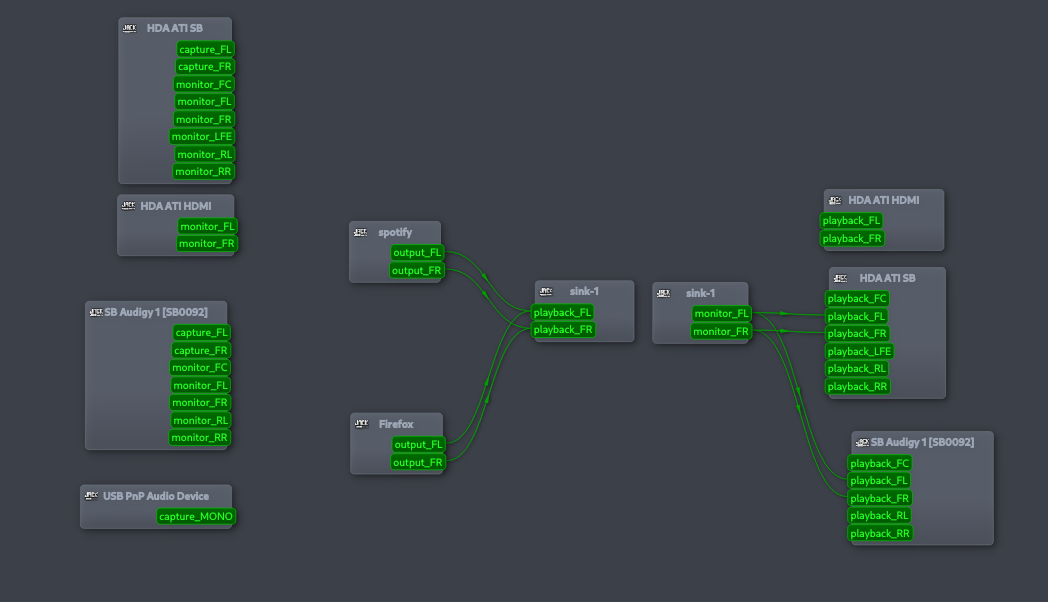 For instance if I try to connect the capture channels of the SB Audigy card to the sink playback channels, the connection just doesn't happen (i.e. as I release the mouse, a wire doesn't appear).

Other connections I can't make are:

Moreover, with the graph shown above, I can't disconnect the Firefox and Spotify output nodes from the sink.

This is just an example situation, but I have been playing around with PipeWire for some hours and I'm experiencing other weird things I'm still not able to reproduce consistently... Like if I connect applications like Firefox and Spotify to the playback nodes of a card, and also connect the capture of the same card to the playback, the apps sometimes stop playing. If they don't, as soon as I pause the playback (on Firefox or Spotify) and try to resume it, the applications get stuck. I'll try to open a separate issue for this so I'm not mixing things up...

I talked about the other issue because of the following, which I guess will be of benefit for both issues: how/where can I see message logs regarding this? Is there a place where something like "can't connect X to Y because Z" is logged? I tried to check the logs of the pipewire service but I saw nothing, and the messages window of QjackCtl doesn't show anything either.